The “Wednes-Bidet” update for POSTAL 4 is NOW AVAILABLE! 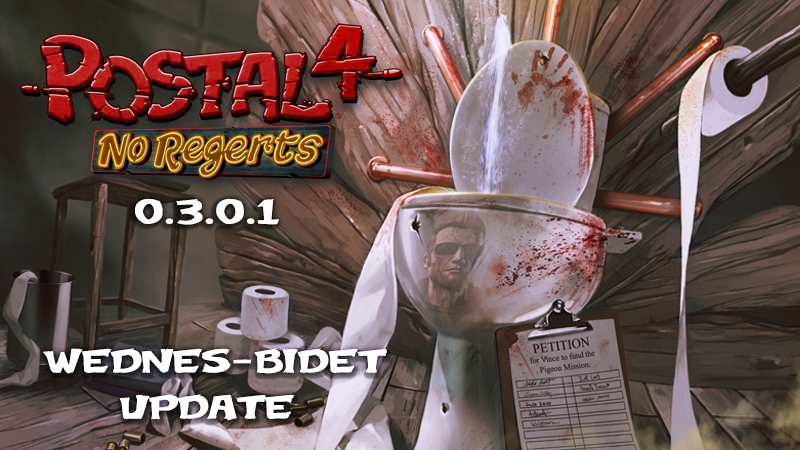 Here it is! Hump day, or [i]‘Wednes-Bidet’[/i], if you prefer. Lots of new features, areas to explore, Errands, and of course, jank! We’ll be following this update up with some more in the coming days and weeks to include a few things that didn’t quite make the cut. For now, feast your eyes on what’s coming down your Steam pipes right now, and we hope you enjoy your visit to Kunny Island. Don’t be sad you can’t ride the roller coaster – you’ll be able to shortly!

On Wednesday, Mayor Mike J tells the Dude that the next wave of enlightenment in his town will be spreading the word of the bidet, and there’s no better way to convert others than by forcing it on them! Mike sends the Dude to install bidets into the compound of his bitter rivals, the Wipe Militant cult, believers of the toilet paper. Naturally, they’ll be none too pleased at the Dude’s actions, but it so happens that the Wipe Militant also happen to be in conflict with the local Anal Hygiene Matters protest movement. Maybe the Dude can leverage this animosity to lighten the hostilities on himself. Bidets must be installed into the number of toilets scattered around the building, but in the process of doing so, the Dude will eventually run into the central throne room and confront Tinklage, the diminutive Wipe King himself who acts as a mini-boss.

On Wednesday, Mayor Mike J informs the Dude that Krotchy Co. is expanding its brand, and the brand new Kunny Island family entertainment park is having its grand opening in town with Kunny herself appearing in person to educate the children (but mainly just the creepy old men who show up) about the wonders of the female body. Mike is none too pleased at this development as he had been eyeing this swamp land for his third mansion. He tells the Dude to head deep into Kunny’s land and crash its opening.

On Wednesday, Mayor Mike J informs the Dude that there’s been a massive backup in the town’s sewage system due to the careless overuse of toilet paper, wipes, and other disposables that the proper use of bidets would have alleviated. This backup has unfortunately erupted south of the border within the Mexican side of the town, leading to American sewage bursting out of the streets’ gutters and central fountain.

To delicately handle this sensitive diplomatic situation between the two countries, the Dude has been sent with a hose to clean up the giant piles of human waste spread around the Mexico Town Circle. Sounds simple enough. After all, surely there’s no armed group who’d want to commandeer all this human waste for their own profit, right?

On Wednesday, Mayor Mike J declares his intent to enforce his planned bidet empire with a hefty dose of political pressure. He takes the first step for any reasonable revolution: a petition! That is, a call for “A Bidet In Every American Home!” Petition in hand, he sends the Dude out into the town to collect nearly a dozen names of support. However, the Dude finds petitioning skills may have become a bit rusty in the last 17 years as he can’t collect even one John Hancock. He’ll have to take some drastic measures, but will it be by force, or by sex appeal? 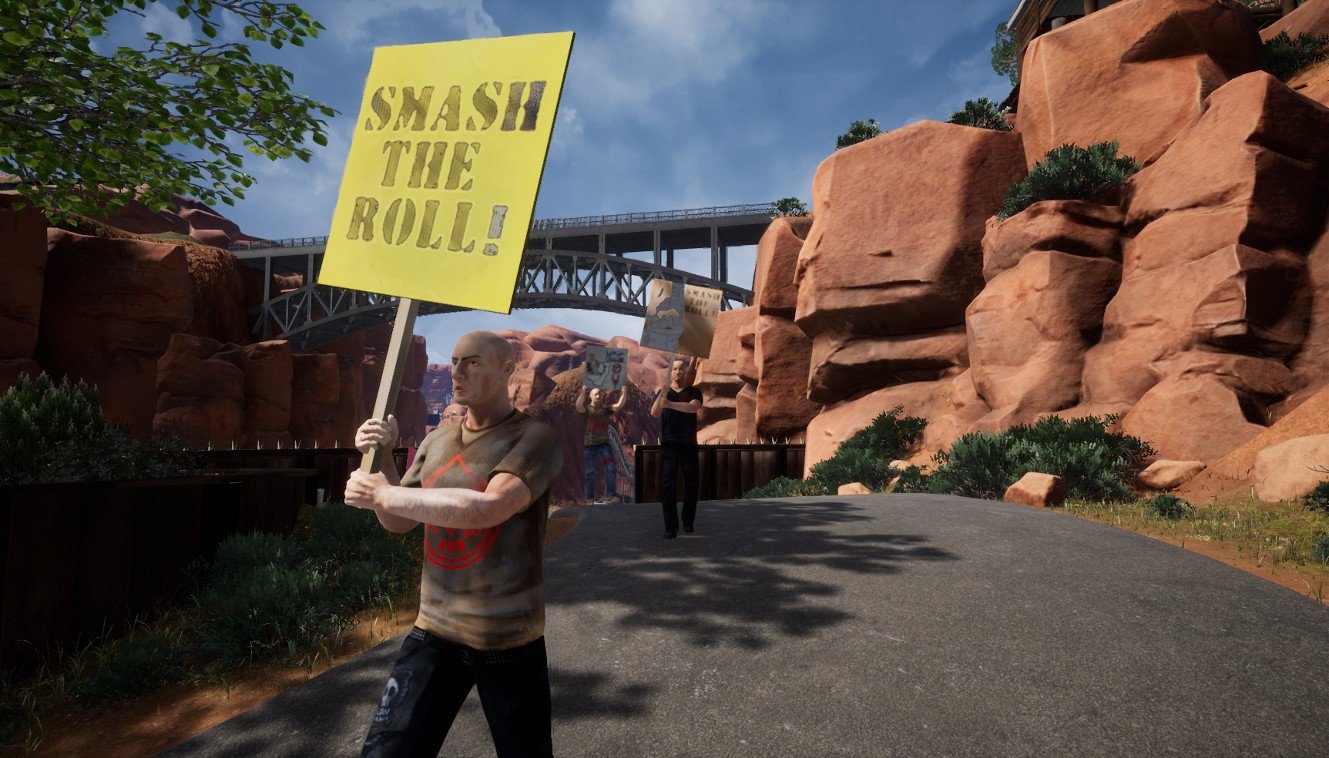 A simultaneously feudal-like and fascistic cult that believes the only thing that should come into contact with man’s rear end is the gentle touch of a dead tree. As such, they consider bidet-believers such as Mike J to be heathens. They operate a compound that the Dude visits in his Mission to install bidets.

The “Industrial Tile” is located in the south-eastern part of town. This tile is part of the Affluent/Industrial District where a combination of the town’s elite and wealthiest live and heavy industry buildings. In other words, picture large, lavish, and upscale homes placed alongside warehouses and factories. The centrepiece of this tile is the Indoor Sports Arena which hosts events to record breaking non-attendance.

The Affluent/Industrial zone features the “green belt” theme. Unlike its dusty and rocky neighbours to the west and north, this area is host to a great deal of green and grassy foliage. Not an outright forest, mind you, but clearly a lush and lavish contrast to the rest of the town, it being a near oasis in the literal desert. 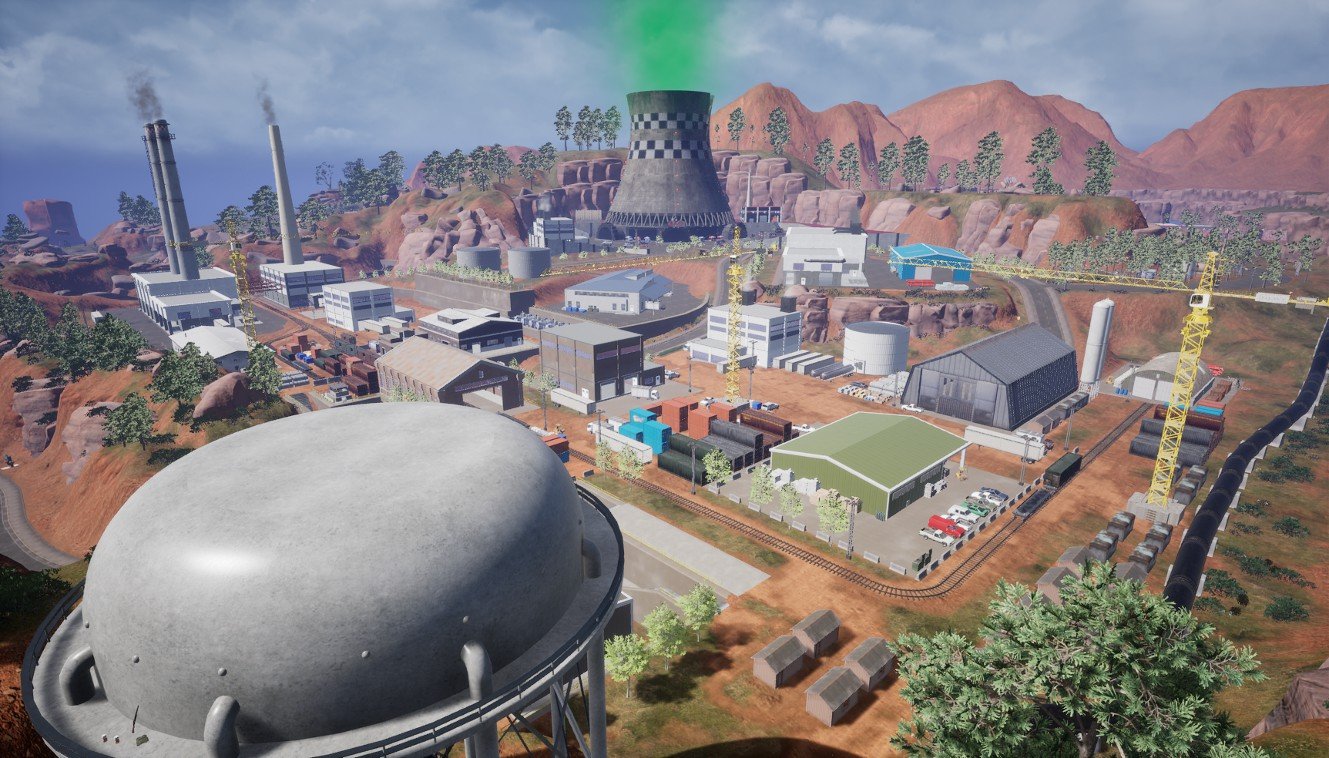 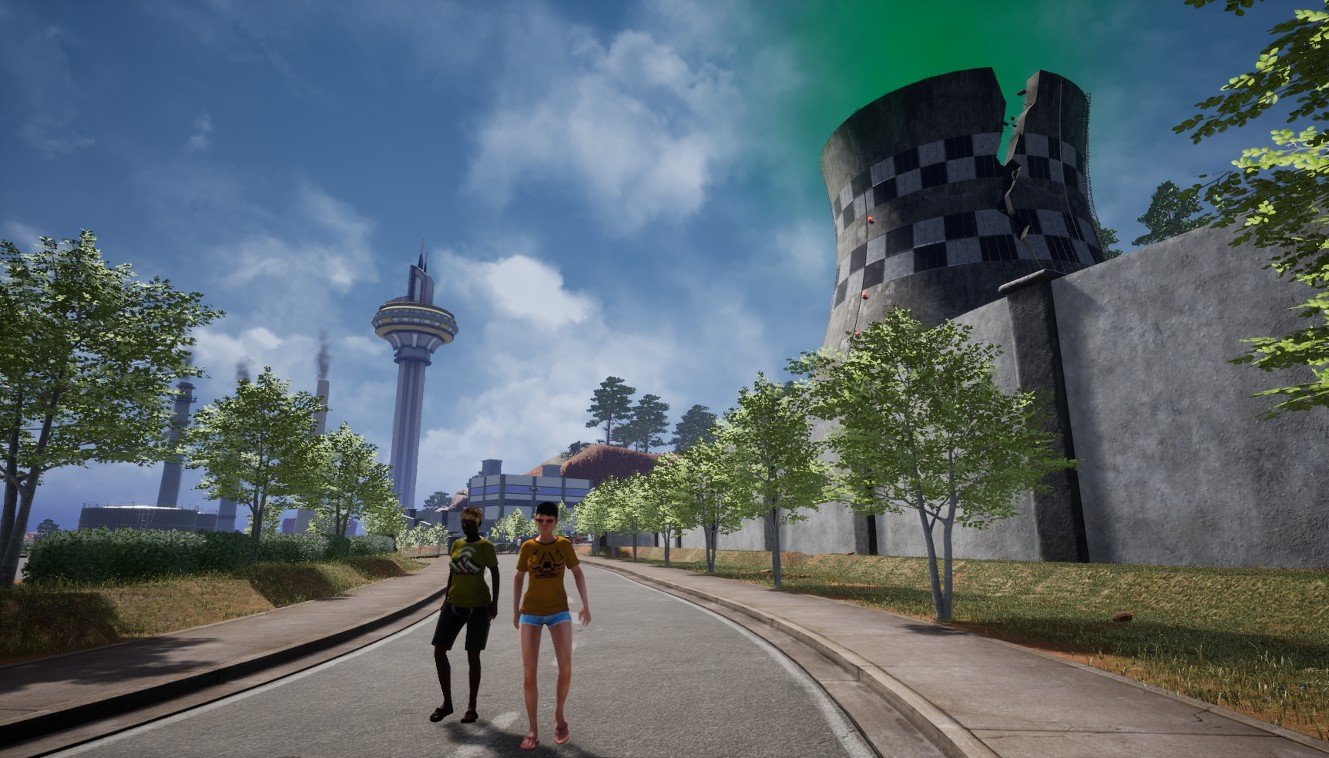 The “Affluent Tile” is located in the central easternmost part of town. This tile is part of the Affluent/Industrial District where a combination of the town’s elite and wealthiest live and heavy industry buildings. In other words, picture large, lavish, and upscale homes placed alongside warehouses and factories. The main draw is the Mike J’s Mayoral Estate which sits proudly at the top of the hill:

Mayoral Estate – The grand mansion that’s home to the Mayor Mike J and his delights, namely lots of bidets. Imagine Tony Montana’s mansion at the end of Scarface but with much greater emphasis on anus cleanliness. 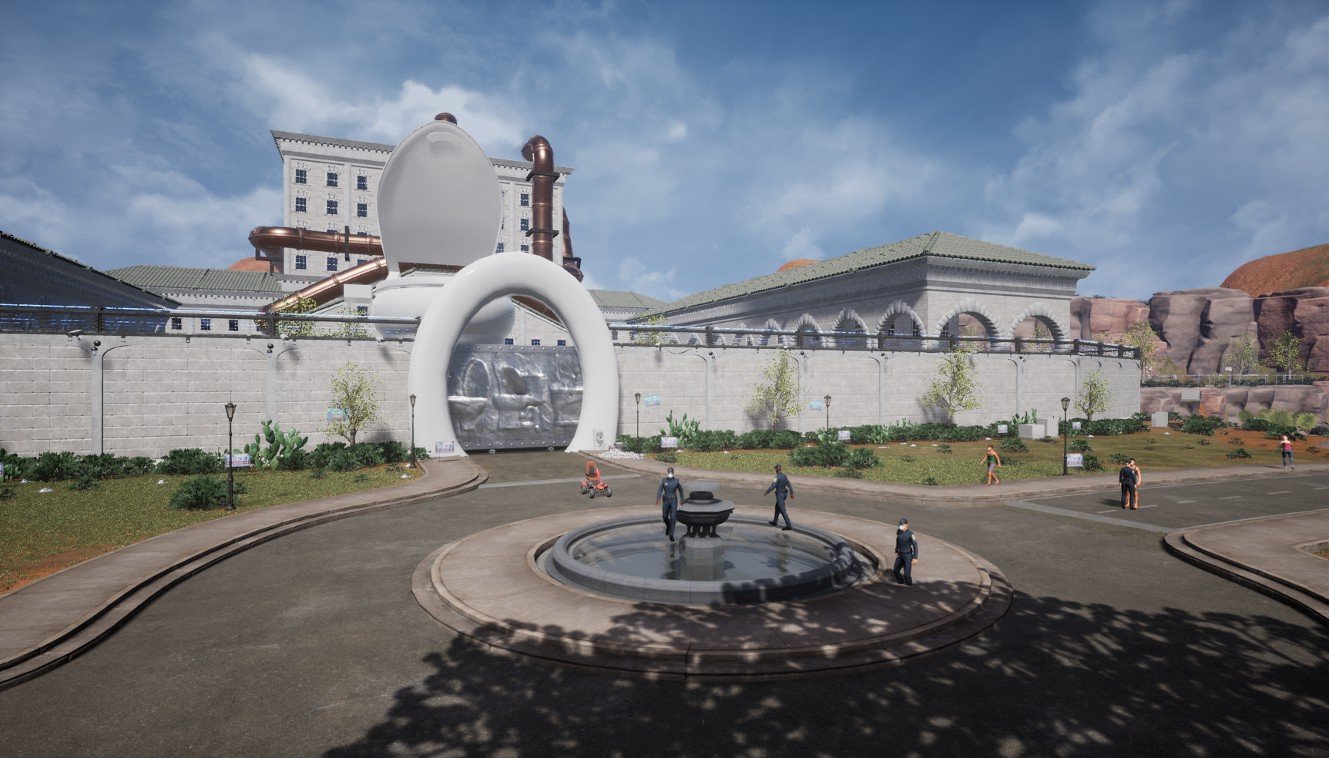 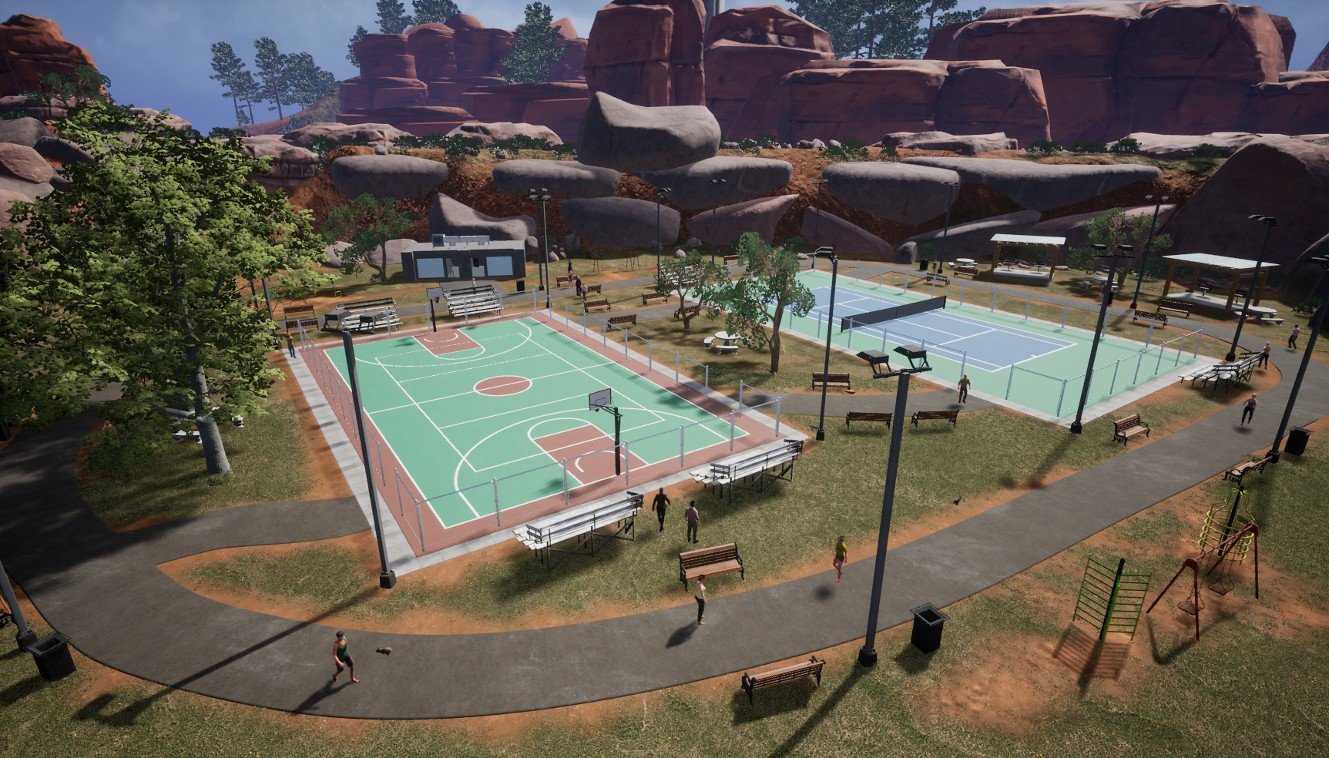 An outdoor family entertainment centre akin to a particularly large Chuck E. Cheese establishment with some Disney overtones but with a much larger focus on the female genitalia. Lots of suggestive imagery blended into the attractions. Despite the seeming aim at a young audience, there’s nary a youngster in sight. The main attendees are particularly creepy men.

Dude cosmetic changes: At fashion stores, such as the errand-specific Phil’s/Lil’s Fashion Funwear, the player can buy clothing items which change their model. Currently, players will only be able to obtain two new outfits, Sexy outfit and Classic Trenchcoat outfit – that’s right, the much requested Trenchcoat get up from POSTAL 2 is now available! 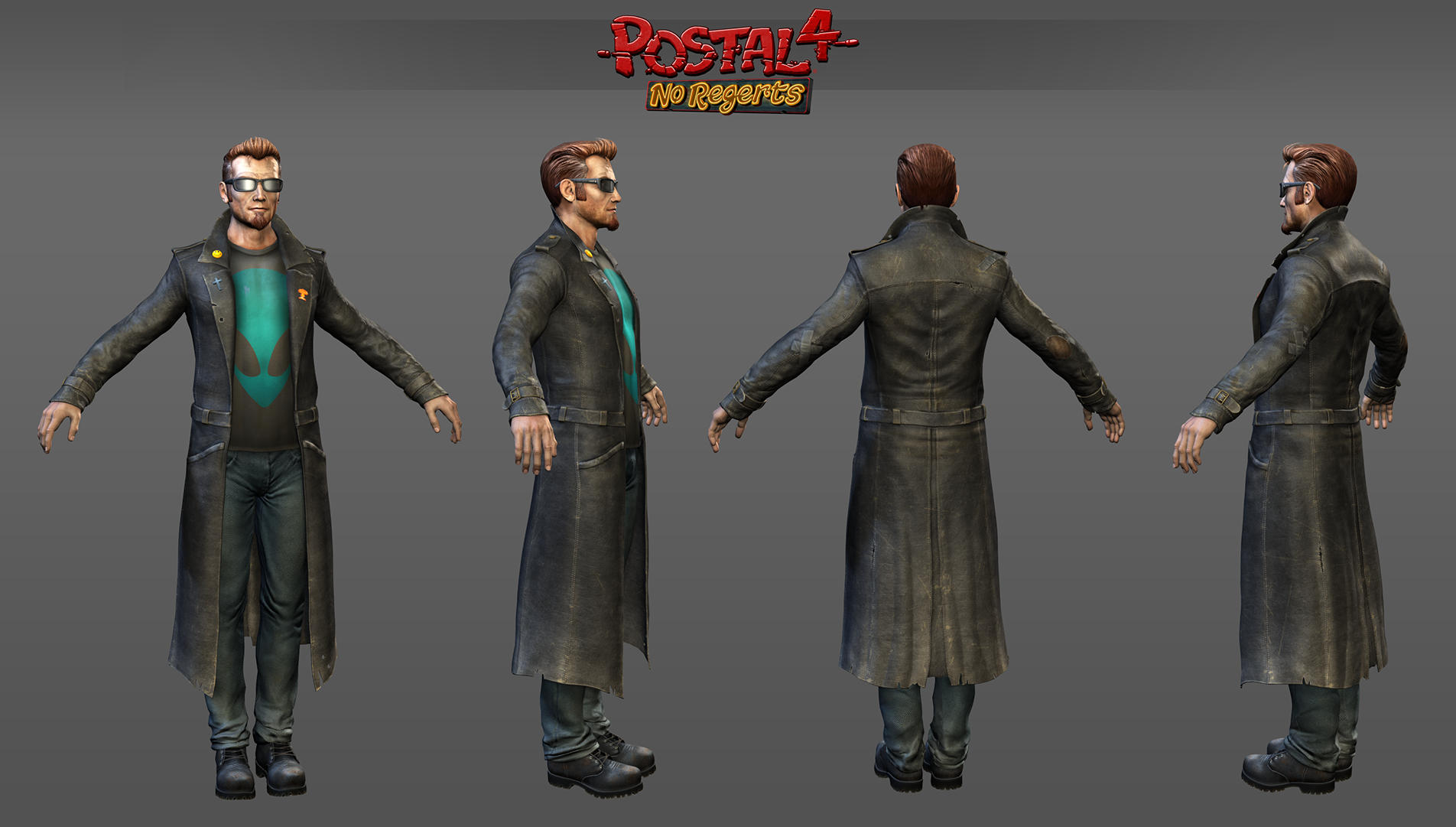 First-Person Weapons and Arms gettin’ dirty! – Blood and Dirt masks. A very cool visual feature which allows for our weapons and Dude’s arms to get splattered with various liquids and dirt such as blood and poo depending on what the player is doing. For ex. Damaging an NPC will splatter blood on the arms as well as the weapon that’s currently equipped. The blood will eventually fade (You can also clean yourself by aiming up with the Hose or Super Soaker!)

Scooter Station markers on the map

Two firing modes for The Fournicator: Primary fires one shell at a time, and the Alternate fires all the remaining shells. Implemented the remaining Super Shotgun reload animations as well

Implemented assets for Patience and Rebel AI attributes. If you flip off a bystander enough they’ll tell you to go fuck yourself

Rolling fluids! All fluids that are in the game will now dynamically roll down various surfaces. This was also a feature in POSTAL 2, but we’ve made lots of improvements to the P4 version in order to make them look more natural and just generally nicer. Added ‘Flow Quality’ settings to the performance menu

Interactable rides! You will be able to interact with various rides in the Kunny Island. In the current Wednesday release, only one ride will be interactable with the second coming shortly after. We plan on expanding this number greatly in future updates

The Mop! Similar in utility to the Shovel and reminiscent of the tool in Viscera Cleanup Detail, the Mop’s weaker damage output is offset by its quicker attacks and ability to more reliably stun enemies, the Dude using it like a kendo stick. It can also be used to clean up liquid decals such as spilled blood, vomit, etc., this function being used in a Mission

Replaced placeholder Fast Travel board with a new model

Tweaked Save/Load menu to make it more intuitive to use

Updated sounds in the Sewers

Adjusted bullet impacts, and updated them so they are louder

Enemies attacking in melee will now only engage in pairs, with the rest hanging back in cover

Improved doors and NPC’s raising their hands when opening them

Cops are now treated as a special case for combat warnings and other alerts. If not engaging in combat, they will go over to investigate the warning as if somebody had ratted out to them

The scooter will now pause when you hit a cutscene trigger

Increased the size of the drawing brush on Billboards

Map screen errand reveal now starts where the player is

Cops not responding to you putting your weapon away. They will now be able to tell even without line of sight

AI spawning with empty mags instead of full

The Fournicator shells not spinning when using the Catnip reload

Collision on a bunch of assets such as gates, railings, etc

Multiple autosaves not working at all (Old autosaves will get renamed)

Awkward pause at the start of Bellow cutscene on Monday

Scooters popping in close to Player

Inmates getting stuck in their cells in the Prison map