The “Tread lightly” update for POSTAL 4 is NOW AVAILABLE! 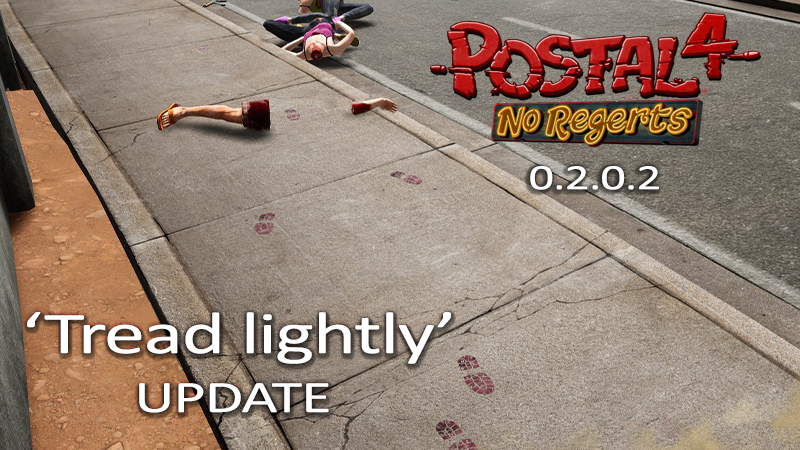 We are full steam ahead on Humpday and making some great progress! It will be a while before it’s fully ready – so we are going to make sure you guys still get regular updates in the meantime to introduce cool new features, quality of life improvements and various bug fixes.

The headline feature here are the footprints. When NPCs, The Dude or an animal walks through any type of fluid, they will leave a trail of footprints behind. You can even light the ones left by gasoline on fire!

Regarding the new randomized codes in the prison introduced in the last update – we heard you, they suck. We have now implemented a post-it note to the map screen that will record each code as it’s assigned. No more backtracking to the previous cell because you forgot the code!

This update adds a new quality of life feature when rebinding controls. The game will now warn you if you’re trying to rebind the same key to multiple actions.

And a few other odds and ends listed below!

Footprints! NPCs, Dude and even animals will leave a trail of footprints when they walk through any fluid

More pickups in the Commercial tile

Reduced chance of masks appearing on NPCs on Monday

Ingram’s Catnip reload not working properly while under Catnip