The “The Cure” update for POSTAL 4 is NOW AVAILABLE! 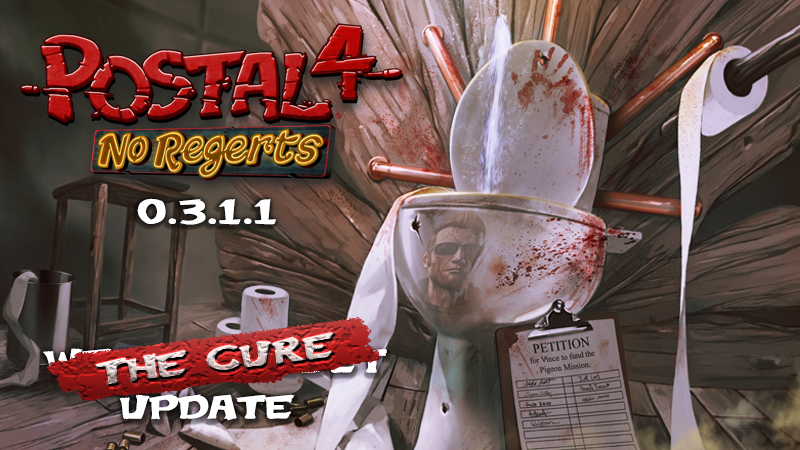 Hello, POSTAL people of all persuasions!

As promised in our last developers update, performance has been improved across the board on most PC configurations, ranging from 5 to 20 fps depending on your set up or area of the game you’re in. We’ll continue to work on performance, and things will keep improving with each passing update from here on out.

In the weapons department, we’ve added a new rapid firing pistol, and changed the Fournicator’s model to look more suitably powerful. We’ve also tweaked some of the core weapon mechanics based on feedback, such as increasing the reload speed on some weapons and decreasing the time it takes to switch between weapons.

Work on improving the cinematics and general presentation continues, and we’ve fixed a ton of bugs (as well as probably introducing a load more!).

While we have left the ability to load old saves and resume your game, it may cause you some issues – so starting a new game is advised.

Finally, what you’re seeing here is only a small amount of the work that’s been done since the last update – Thursday is in fall swing behind the scenes!

Thank you for your continued support!

P350. A fast-firing, lightweight alternative to the Deagle / Revolver has been added to the arsenal. It fires as quickly as you can hit the trigger. Fun! 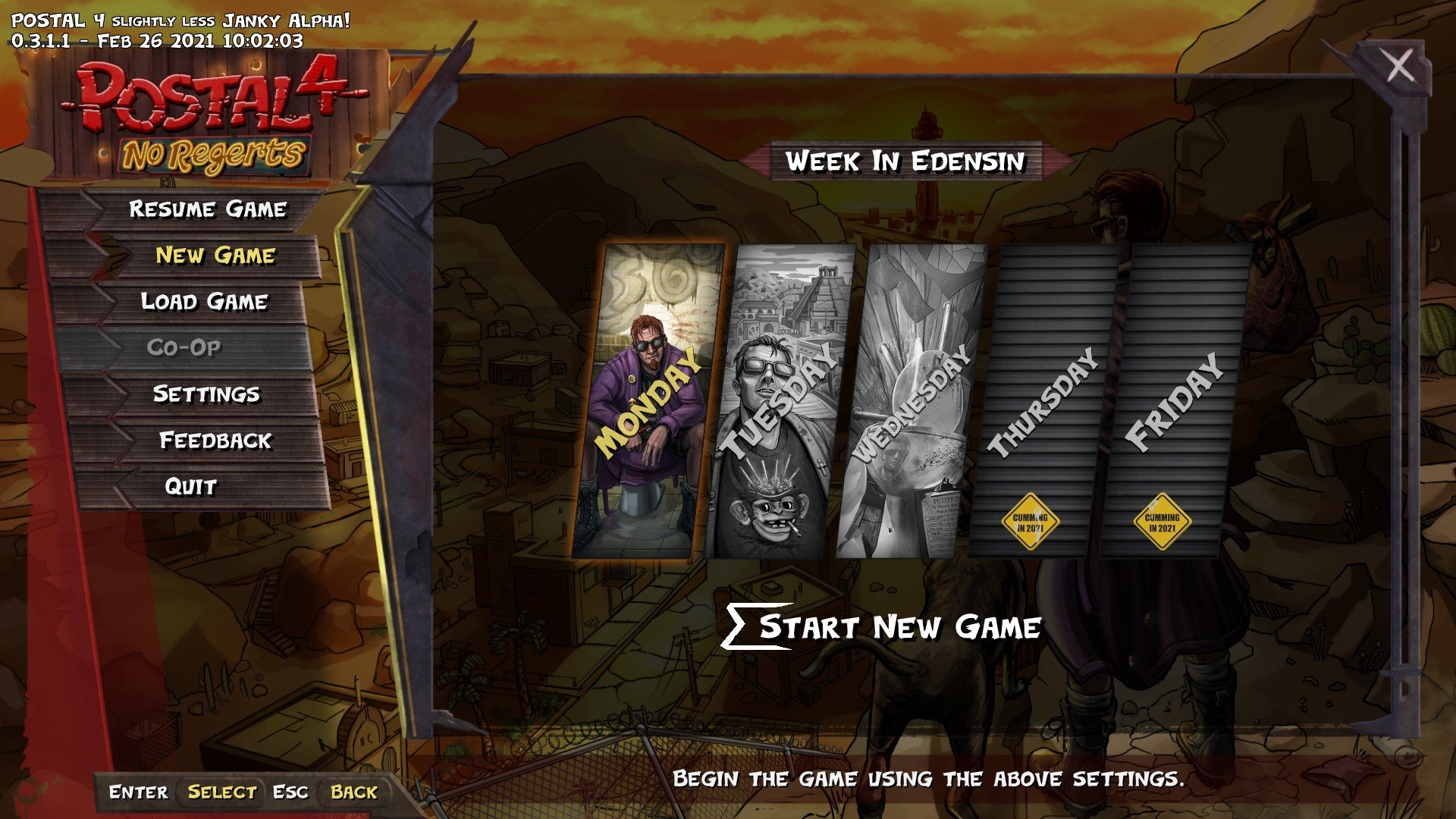 Implemented fluid ribbon collision (Fluids will no longer go through things such as glass. Instead, they’ll collide with them)

‘Back’ button to Fashion Funwear Menu

Warning note for old saves in Save / Load menu

Reworked and improved the Fournicator model 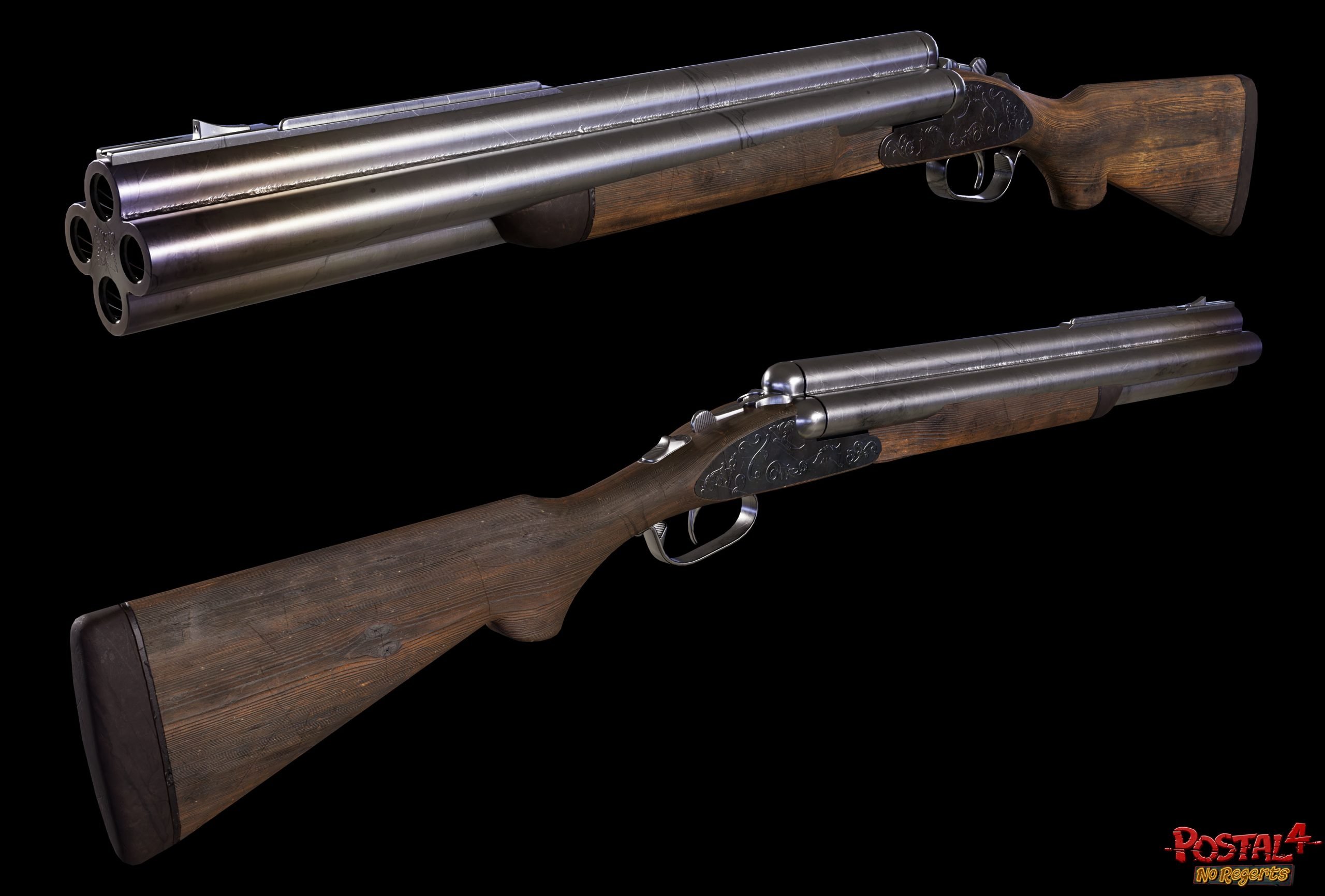 Improved appearance of the Tazer particle

Made improvements to Carter Cruise’s model

Improved interiors in Mexico side

Buffed the amount of ammo from dropped Ingrams, M16s and AKs

Increases the reload speed for the Pistol, AK and M16

Tweaked the FirstPerson foot for Sexy Outfit and Classic Trenchcoat

End-of-day movies should now freeze gameplay during the movie

Dude’s foot disappearing when kicking with a cosmetic applied

Tinklage (and others) forgetting about the player when going into ragdoll

More crashes that were reported on our forums

AI combat when player is on the Scooter

Hose not disconnecting if Player is arrested

Collision on the fire hydrants

Removed lag when bringing up Phone

Lopsided camera after respawning when doing the mexi cleaner errand

Unhandled or improperly handled boss cutscene scenarios (Killed both bosses and destroyed all power boxes, killed one boss and bribed the other, reloading game after – bribing one or both bosses)

One of the cars in Kunny Island parking lot not exploding

Piss not colliding with Fire Hydrants

Kunny and Carter Cruise not getting up properly after getting ragdolled

Gasoline puddles not being created on most surfaces