The “Dream of Scooter Fournication” update for POSTAL 4 is NOW AVAILABLE! 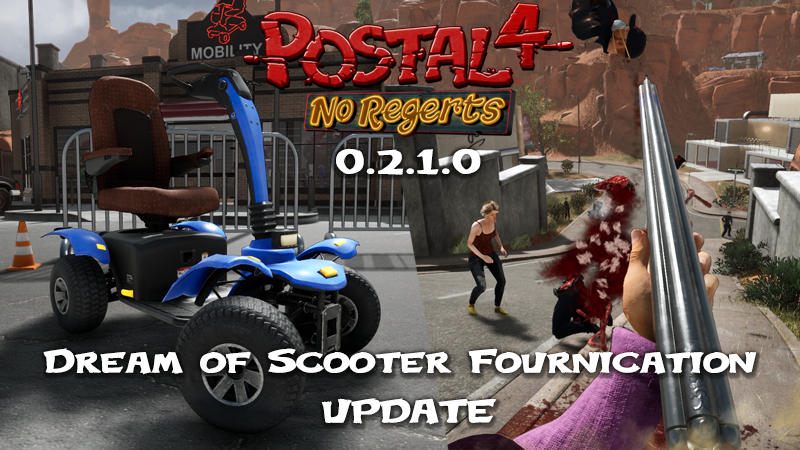 It’s update time! We’re still hard at work on Wednesday content for a future update, but in the meantime, here are many of the new features we promised you in the last developer update!

The scooter no longer sucks! Not only can it handle rough terrain better, it will also go up and down curbs like a boss. Furthermore, it will no longer flip over for little or no reason, making it a joy to bumble around on. But the awesomeness does not end there! As you can now live out your wildest mobility scooter drive-by fantasies, because It’s now possible to use one handed weapons while operating the scooter. While we were there, we also improved the model and sound effects as well as adding more colour variations. You’re welcome!

We’ve had many requests to bring back the sawn-off shotgun that was included in a POSTAL 2 update back in 2013. Well, we decided to go one better – Introducing The FOURNICATOR quad-barrel shotgun!

Our ongoing mission to improve the in-game cinematics continues, and this update brings a massive improvement to the Prison Guard intro cinematic.

We had a lot of feedback that people are not too keen on how we have the weapons grouped together currently with the quick selection keys, so we’ve added the option for you guys to customize what weapons are under which numerical keyboard key on the keyboard.

We’ve included two new features that are not yet finished but are still in a good enough place to showcase. Fluids now roll down hills and slopes, and you can expect visual improvements here in a future update. We’ve added a new emote wheel, which you can activate with Alt Fire when you are not currently holding a weapon. We plan to expand on this with more dialogue and better NPC reactions in a future update.

And naturally, we’ve fixed up a lot of bugs and crashes.

Please keep on reporting bugs, giving us your feedback (We read it all and are acting on much of it) and thank you once again for your amazing support.

NOTE: We’ve switched to Vertical FOV calculations which should finally fix the problems ultra wide users were having. You may have to change your settings. Also, going forward, all saves from a previous build will be flagged red. You can still use them, but there may be problems. It’s recommended that you start a new save file to avoid issues.

New Scooter! The model and general usability has been greatly improved to make it a lot more fun to drive. We’ve also added the ability to use one-handed weapons whilst on a scooter as well as more color variations!

Here you can see the new suspension system as well as fenders which move and are destructible. You can also see how after falling, Dude will properly ragdoll and the scooter will flip itself up every single time:

Ambient sounds in the Arcade

Bystanders will now get annoyed when you spray them with water

Removed the time slowdowns when opening the color and emote wheel

When firing in an area with bird ambience, the ambience will stop and play a bird flapping away sound

AI should no longer skip patrol state when they lose an enemy, cops will remain on patrol until wanted level goes down

Lots of audio improvements around all levels

Older, incompatible saves will now be marked as red

Kicking vehicles with ‘Vitamin X’ kick will no longer make them explode right away, instead they’ll fly up into the sky

Replaced the Molotov’s wick particles with a new Material effect

Collision on the Big Ship

Keyboard sounds playing if Master slider is set to 0

Some clipping in first person weapons

Fixed a LOT of crashes (Thank you for all of the reports!)

Keypad codes turning into ‘???’ after entered

Cutscenes running while game is paused

Fixed ladders at the back of the Bidet shop, and another ladder in Tag Turf errand

Broken “reload” animation that was assigned to the Spray Paint Can

Hose’s cable getting stuck in walls and stretching

Gib Melee weapons not slapping ragdolls in the correct direction