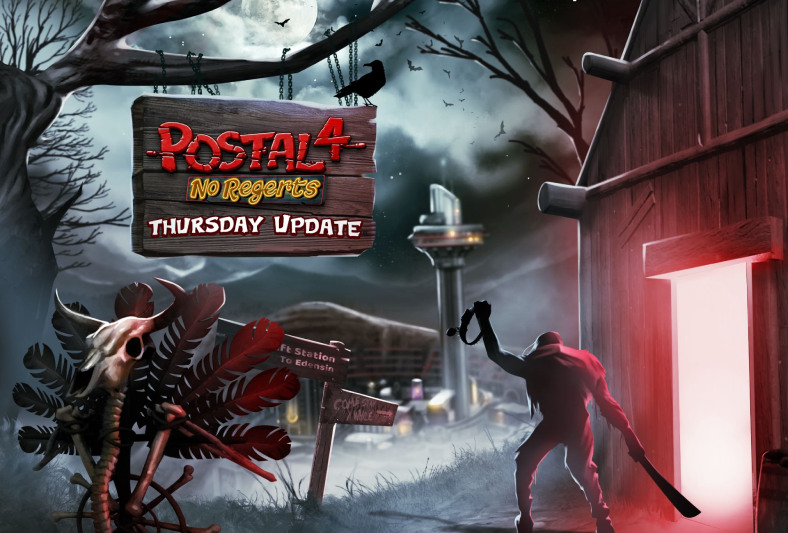 Thursday’s affairs begin in the Lynchian “Dark Lodge,” where iconic anti-hero The Postal Dude awakens to find his canine companion Champ and all his possessions MIA. Unarmed and unfriended, the Dude must fend off wacked out hillbillies, rescue Champ, grab his pilfered junk, and escape the backwoods of Edensin. Hell of a way to kick off Thursday!

The raw deal continues in Edensin proper, where the Dude is forced to do the dirty work of the notorious Vince Desi, a domineering crime boss. The Big V.D. fills the Dude’s itinerary with underhanded enterprises. Stroll to the polls and gently encourage Edensin’s public to vote for Vince’s favorite candidate. Become a beta tester for the latest Virtual/Augmented Gaming title from local dev team Koblomi Studios. Rig a high-speed mobility scooter race, play pit boss at the Pair-A-Dice Casino, and thwart a heist in the making.

The open world sandbox of POSTAL 4 grows larger and more voluminous than ever. Enter the Zag, a “Z”-shaped district in the center of Edensin with casino attractions galore. Return to Edensin’s other districts for new random encounters and revisit Kunny Island for amusement park rides. Snipe varmints and humans with the new Hunting Rifle and play your way with the Rattler, a chained whip with a scythe head. Don’t worry—the other end is a mere blunt weight, great for a non-lethal playthrough.

Because the riveting odyssey of the Dude is a story for all, the quality-of-life updates keep coming. Flip on English subtitles, with more languages on the way. Sharpen your aim with a new aim-down-sights option. Use the new waypoint system to better navigate Edensin’s massive land area. Deep into Early Access with 1.0 on the horizon, it’s never been a better time to visit.

“Finally, The Postal Dude meets his match, and is now working for ME,” said Vince Desi, founder of Running With Scissors. “I’m going to send players on the craziest, raunchiest, POSTAL-est day yet. The Big V.D. aims to please!”

Founded in 1996, Running With Scissors is one of the oldest indie studios in the game industry. RWS focuses on creating socially conscious games that offer signature experiences focused more on making people laugh that making sure everyone is comfortable.