RUNNING WITH SCISSORS Drops “Friday’s” Load on Early Access of POSTAL 4: No Regerts® 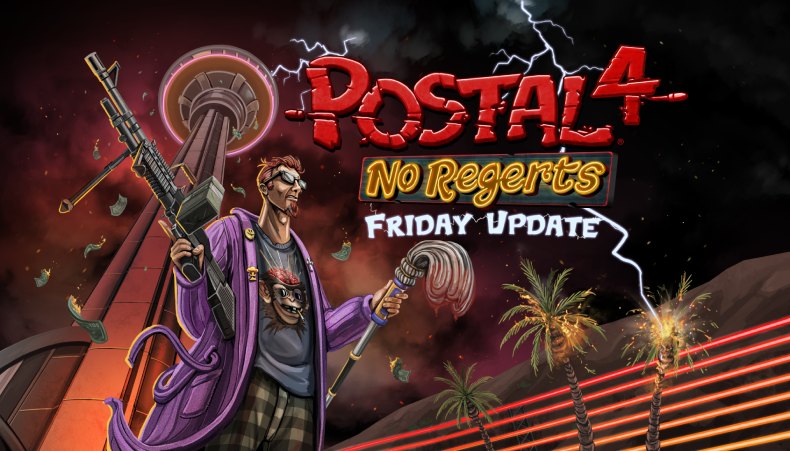 Now comes the anticipated climax with the “FRIDAY” Update for POSTAL 4: No Regerts®. The Postal Dude’s long and hard week reaches an explosive end on this final day with new errands, more weapons, and new moves and features to tingle your playtime.

In this concluding chapter, The Postal Dude will need to overcome numerous obstacles in order to satisfy “The Boss”, the powerful and mysterious figure who has surreptitiously orchestrated the events of this week. Put your hole plugging skills to the test as you race to save the dam from flooding the whole damn town, and maybe thwart those doomsday cultists who just happened to show up threatening to contaminate the water supply while you’re at it. Fight against an increasingly growing mercenary force which has taken over the local Edensin MegaMall and pacify their enigmatic leader. Recover a familiar historical artifact after a recently formed sinkhole within the former goldmine revealed an undiscovered “long lost” underground civilization. And that’s just the foreplay as the Dude enters the Endgame! Battle to the death against the week’s familiar acquaintances, and finally confront “The Boss” himself atop his monolithic HQ, the ERC Tower.

Flip on the English subtitles, with more languages on the way. Kick ATMs and vending machines for some extra cash and goodies, use the new Inventory Wheel to assign and quickly select your items, listen to the two new radio stations KDTF and EdenSYNTH, and much more!

“24 years in the making, just kidding, dropping Friday on Early Access is like an atom bomb of creative craziness, I’m very proud of the RWS team,” said Vince Desi, aka Papa Desi by RWS’s beloved fans.

POSTAL 4: No Regerts is the ultimate insane open-world sandbox shooter. Five full days of mad fun and game partying is now available on Steam Early Access, GOG, and Green Man Gaming for PC. Hero or anti-hero, black trench coat or purple bathrobe, a week in the shoes of The POSTAL Dude awaits you.