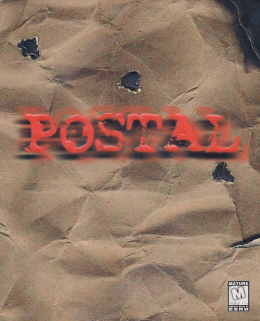 Welcome to Paradise… Arizona. They’re out to get you. Or are they? It doesn’t matter. You don’t have time to think, only time to kill.

Take control of The Postal Dude in his infamous first outing! POSTAL is an isometric shooter filled to the brim with fast-paced explosive action. Blast, maim and fire-bomb your way through 17 unsuspecting locales, from a small town to a heavily guarded military complex. Don’t get too crazy – this killing spree is anything but senseless. Out here, strategy is key and the locals are packin’

POSTAL is released to the unsuspecting public. The hate mail was instant and almost more vicious than the game itself.

POSTAL is banned in 14 countries and blacklisted in America.

RWS release a Chrismas patch with an exploding present-tossing Santa – along with a contingent of reindeer – into the game.

POSTAL: Special Delivery, an expansion pack for POSTAL, is released. It would be bundled with all official releases of POSTAL from now on.

POSTAL and Special Delivery get bundled together in a retail compilation titled POSTAL Plus.

POSTAL Plus is bundled together with POSTAL 2 Demo and a POSTAL 2 bumper sticker, and released as POSTAL: Classic and Uncut.

POSTAL is released on GOG as POSTAL: Classic and Uncut.

POSTAL gets released on Steam, along with many updates to fix problems on newer hardware and improvements to sound quality.

POSTAL is ported to Android phones, and released on the Amazon Appstore, after being denied release by Google‘s Play Store. This release gives players a dual-stick control scheme, allowing independent movement and aiming.

The Steam version of POSTAL is updated with a similar control scheme to the Android version, allowing players to play the game as a twin-stick shooter with their keyboards or controllers.

POSTAL is finally made open source, and thus its source code is released to the public. A Dreamcast port is formally requested of the community, by RWS.