The “Frames, flares and feet” update for POSTAL 4 is NOW AVAILABLE! 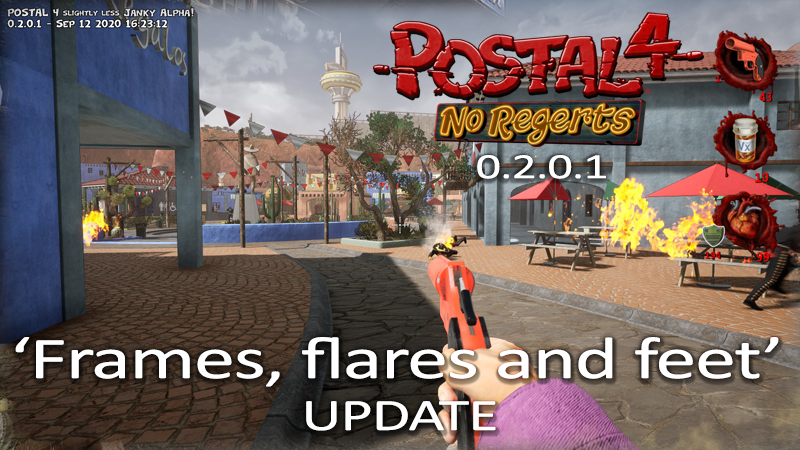 This is THE UPDATE many of you have been waiting for – A SIGNIFICANT PERFORMANCE UPDATE! Our work in this area is far from done, but many of you will enjoy a framerate boost of around 10-20fps in some of the worst affected areas. We will continue to improve performance throughout the rest of the project.

Related to performance – we’ve rewritten the mouse movement code so in the event the game does hitch, you will no longer end up facing the wrong direction, making remaining performance drops far less intrusive.

Beyond that, this update improves kicking behaviour and animation. It’s now far easier to kick around physics objects and ragdolls. Oh, and you can also kick cars when using Vitamin X, too!

Prefer projectile based combat to melee? We have you covered! Introducing a new weapon – The Flare Gun!

Our ongoing work to improve the cinematics continues with the Tag Turf, Bellow and Cat dude Intros all getting a pass.

We’ve fixed up a ton of crashes, and a laundry list of other things you’ll find listed below.

Thank you all so much for your continued support, believing in our vision and providing us with so much useful feedback.

More NPCs in the new tiles

A hint about changing paint color with alt-fire

Improved the Pet Shop and Tag Turf and Bellow’s cinematics

Scaled up a few vehicles

Tweaked the collision on shell casings and thrown Ingram prop

Improved Prison loading! The unnecessary maps will no longer stay loaded which will result in better performance during the Prison Guard errand. Warden doors will also close properly after the errand

Mouse aiming should now be more consistent and stable

NPC made out of denim aka. The notorious Denim Man (You will be missed)

Being able to pick up the Scooter

Body fire on Mutant Rats being way too big

Weapon fire no longer gets stuck when phone is brought up

Scooter when going through a zap zone

Weapons floating in front of The Dude during cinematics

Addressed various crashes that were reported on our forums

The Meet Associate cutscene can now be skipped properly

Dude pulling out a weapon during cutscene

Some bugs with the Gas Can match setting inflammable animals